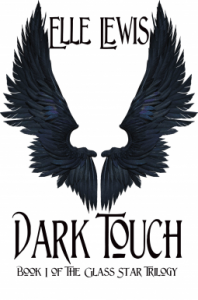 The way I see it, Dark Touch fits perfectly into the paranormal and urban fantasy genre. What I liked most about it, apart from being my favorite genre, was its original mythology. The market is saturated with stories about vampires, werewolves, and witches (which I love and write about it, too). Therefore, a story that brings in new supernatural creatures is like a breath of fresh air!

Dark Touch is not epic fantasy, so don’t expect intricate world-building, just enough for the plot to make sense. The characters, on the other hand, are intriguing and the fast pace of the story is engaging till the last page. By the way, if you’re planning to read it, arm yourself with patience, because it ends with a cliff hanger! But you’ll get some sort of closure, so it’s not that bad, just leaves you wanting for more!

Sloan, the main character is touched by a supernatural creature and is supposed to die instantly. When she doesn’t, she attracts the attention of both the being who tried to kill her and others who want to protect her. A tug-of-war ensues. Sloan finds herself hunted both in the real world and in her dreams.